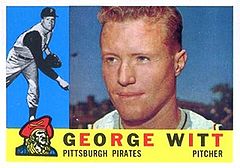 George Witt was a big, hard-throwing redhead who began his professional baseball career after being signed as an amateur free agent by the Brooklyn Dodgers before the 1950 season. "Red" started out with the Greenwood Dodgers of the Cotton States League his first year, going 6-3 with a 2.86 ERA. He then spent 1951 in the United States military during the Korean War. Upon returning from the service, he experienced just average success through the Dodgers organization. He was then selected by the Pittsburgh Pirates in the 1954 Rule V Draft, on November 30, 1954.

After a couple of rough seasons in 1954 and 1955, George had a career-best 18-7 record with a 2.24 ERA for the Hollywood Stars of the Pacific Coast League in 1957, plus making the All-Star team. He was called up for his major league debut on September 21, 1957, losing his initial contest. Witt opened up the 1958 season with the Columbus Jets of the International League, going 3-2 and looked to be on his way to a great career with a big league record of 9-2 and a 1.61 ERA. He won seven in a row at one point and threw over 23 consecutive scoreless innings. "Red" had three shutouts, including two against the defending champion Milwaukee Braves. He beat Milwaukee 1-0 on a one-hitter allowing only a bloop single to Hank Aaron which barely landed in fair territory. However, Witt would win only 2 more games in his major league career after that.

He came up with a sore elbow in spring training in 1959 and lost all seven of his decisions in 15 appearances that season. He was limited to little mound activity with Pittsburgh through 1961, splitting his time between the Pirates and the minors. During the 1960 Championship season, he started 6 games and relieved in 4 others. He had a record of 1-2 with a 4.20 ERA. He worked three scoreless innings in relief in three games against the New York Yankees in mop-up roles in the 1960 World Series. Witt was the only Pirate pitcher not to be scored upon in that World Series. After going 0-1 with a 6.32 ERA in 9 games in 1961, his contract was sold to the Los Angeles Angels in October of that year. After last pitching with both the Angels and Houston Colt 45s in 1962, during which he compiled a combined record of 1-3 with a 7.46 ERA, "Red" was out of the major leagues at 11-16 and a 4.32 career ERA in 66 major league outings. Arm injuries ruined a career that had begun with an outstanding rookie season in 1958.

Witt graduated from Long Beach State University and earned his master's degree in physical fitness instruction at the University of California, Irvine. He became a biology and health teacher at Tustin High School, where he also coached baseball and tennis. He always was a fitness buff and ran local competitive track events well into his fifties.