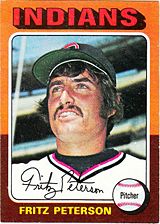 Fritz Peterson is best remembered for swapping wives, kids, and dogs with teammate Mike Kekich in the offseason before spring training in 1973. Peterson is still married to the former Mrs. Kekich but Peterson's wife never did marry Kekich. The two had been very close friends, and their families had done many things together. Both Peterson and Kekich felt that they had fallen in love with the other's wife, but whereas Peterson married Kekich's former wife, the relationship between Kekich and Peterson's former wife did not last. The event became a huge media story at the time, bigger by far than the introduction of the designated hitter or the purchase of the New York Yankees by George Steinbrenner's group.

Peterson had an 11-year career as a pitcher, mostly with the Yankees. He was an All-Star once, in 1970, and was in the top five in ERA twice. These were the dog days of the Yankees when Peterson was with them, 1966-1973, when they usually were not contenders. They finished as high as 2nd once, in one of Peterson's best years. They also finished 2nd in 1974, but Peterson was traded early in the season. He has one of the longest careers with the Yankees without a single postseason appearance, along with Ray Caldwell and Horace Clarke. He was traded to the Cleveland Indians in 1974, the same place that Kekich had been traded the previous season, but by that time Kekich was with the Texas Rangers.

Peterson ended up with the best career ERA of any pitcher that ever pitched in historic Yankee Stadium (1923-2008), 2.52. Whitey Ford came in second with a 2.58 ERA. Peterson also had the lowest WHIP of any Yankee starting pitcher in the post-World War II era, 1.14.

In 1993, Peterson was the head coach of Rock Valley College. He only coached one season, going 3-22.

Fritz published a book called Mickey Mantle is Going to Heaven in July 2009. Other books by Fritz include The Art Of De-Conditioning: Eating Your Way To Heaven and When The Yankees Were On The Fritz: Revisiting The Horace Clarke Era. He is featured sporadically in Jim Bouton's classic book Ball Four.