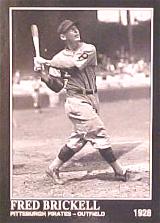 Fred Brickell was a major league outfielder for eight seasons 1926 to 1933 with the Pittsburgh Pirates and the Philadelphia Phillies. Fred would spend most of his career as a substitute outfielder, especially while with the Pirates, where he played behind such greats as Paul and Lloyd Waner and Kiki Cuyler.

Brickell got some attention as a late season call up from the Wichita Izzies of the Western League in 1926 at age 19, hitting .345 in 24 games. In 1927 he helped the Pirates win the National League pennant, and played in the World Series against the famous "Murderers Row" New York Yankees squad. He scored a run in two pinch-hitting appearances as his Pirates were swept. In the midst of the 1930 season, the Pirates traded him to the Philadelphia Phillies, where he would be a starter for the only time in his career. In 1931, he batted .253 and played in 130 games. The next two years, his playing time was significantly reduced, 45 games in 1932 and the Phillies released him after action in 8 games in 1933. Fred caught on with the Kansas City Blues of the American Association and finished 1933 with the Dallas Steers of the Texas League, hitting a combined .260 in 72 games. He was out of baseball in 1934, made a very brief effort with the IL Albany Senators in 1935 and called it a career. He had spent nine years in professional baseball from 1926 to 1935