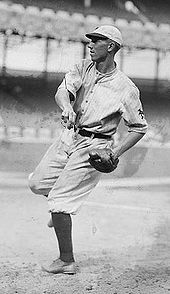 "The Giants have won pretty often since they stuck Fred Brainard in to stop a gap at first base." - The Pittsburgh Press, May 8, 1915

Fred Brainard played three seasons in the majors. Almost all of his at-bats came with the 1915 New York Giants, for whom he mostly backed up Fred Merkle at first base. When Hans Lobert was injured, manager John McGraw moved some players around and Brainard got playing time at first, third and shortstop.

Brainard was born in Champaign, IL and attended the local college, University of Illinois at Urbana-Champaign. He was there at the same time as a number of other future major leaguers, the most prominent of which were Brainard and Jim Breton. Fred played minor league ball in 1913 with Austin, and in 1914 stayed in the Texas League with Austin and Beaumont, hitting .339. He came up to the majors for two games with the 1914 Giants. In 1915, Fred got into 91 games with the Giants. He was in only two games in 1916 with the Giants, spending most of 1916-17 with Providence. In later years, he played for teams such as Columbus, Newark and Dallas. For part of the season, he was on the 1927 Buffalo Bisons, a team which went 112-56. He also managed at Newark, Wichita Falls and Dallas.

Newspapers during his playing career sometimes spelled his name "Brainard" and sometimes "Brainerd".