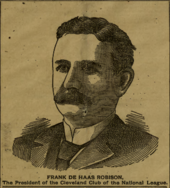 Along with his brother Stanley, Frank Robison purchased the St. Louis Browns from Chris Von der Ahe in 1898. They eventually changed the club's name to the St. Louis Cardinals. Upon Frank's death in 1908, Stanley became the sole owner of the team.

The Robisons had also owned the Cleveland Spiders in the 1890s and were denied permission to sell the club to interests in Detroit or Toronto. Instead, after buying St. Louis, the transfer of players from Cleveland to St. Louis led to the dismal 1899 campaign in Cleveland.

Robison Field was named after his brother and him.

This page is in need of some additional content. Please help the Bullpen by expanding it, or learn how to contribute.
Retrieved from "https://www.baseball-reference.com/bpv/index.php?title=Frank_Robison&oldid=1043281"
Categories: