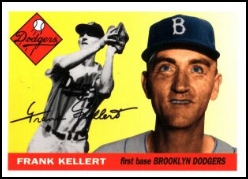 Kellert attended one semester at Oklahoma Agricultural and Mechanical College before having to go into the Army in December 1942. He served 37 1/2 months overseas in North Africa, India and China. He was on a transport ship which was torpedoed by German submarines in the Mediterranean in which 2100 soldiers were lost. Discharged in January 1946, he resumed schooling at Oklahoma A&M and graduated in 1949 with a degree in animal husbandry. His father had worked for Wilson Meat Packing in Oklahoma City, OK and Frank was promised employment there.

Kellert had played baseball at Oklahoma A&M and instead of going to work for the meat packing company, he was signed to a contract with the St. Louis Cardinals by scout Fred Hawn after graduation. He had been a pitcher in college but switched to first base in the minors. He was with the Lynchburg Cardinals in the Class B Piedmont League in 1949 and 1950. He spent most of the next four years in the Class AA Texas League with the Houston Buffaloes, the Oklahoma City Indians and San Antonio Missions.

He played in 122 major league games from 1952 to 1956 at first base for the Cardinals, Baltimore Orioles, Dodgers and Chicago Cubs. He appeared in 3 games in the 1955 World Series for the Dodgers as a pinch hitter. He continued to play in the minor leagues until 1959. In all, he played baseball 13 years in college (3), the minor leagues (8) and the major leagues (4). Later, he became managing director of Wilson Credit Union in Oklahoma City and member of the Oklahoma City Chamber of Commerce. He died from lymphoma at age 57 and is buried at Rose Hill Burial Park in Oklahoma City.