Generally considered the best African-American player of the 19th Century, Frank Grant was born Ulysses F. Grant but was called Frank by his family, perhaps because his father Franklin died when he was four months old. Grant began his professional baseball career with Meriden of the Eastern League, hitting .316, the top mark on the team when it folded in June. He joined the Buffalo Bisons of the International League and hit .344 for the Buffalo team, leading the team and two points behind IL leader Jon Morrison and ahead of Ed McKean. 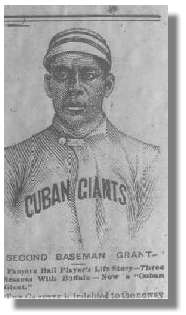 Grant spent the entire 1887 season with Buffalo, hitting .366 (walks counted as hits that year) and slugging .525. He led the IL with 11 homers, hit 26 doubles and 11 triples and stole 40 bases (leading the team). Returning to the Bisons in 1888 Grant batted .346, leading the club and 13 points behind league leader Patsy Donovan. He scored 95 runs in 84 games. Buffalo did not have a team picture "on account of the nigger" according to one player and fans threatened the black star infielder.

Like the other blacks in Organized Baseball, he was run from one team to another despite good statistics. In 1889 he hit .313 with 72 runs in 67 games for Trenton in the Middle States League and played for an all-black team for the first time, with the Cuban Giants. Grant is credited with inventing shin guards while with Trenton that year to protect himself from baserunners seeking to hurt one of the three blacks in the league. A controversy ensued in 1890 when Harrisburg of the Middle States League and the Cuban Giants both claimed rights to Grant; a court assigned him to Harrisburg. Grant hit .333 and scored 66 runs in 59 games before Harrisburg moved to the Atlantic Association, in which he hit .332.

Grant joined the New York Big Gorhams in 1891 and moved to shortstop as Sol White manned second base. The Big Gorhams joined the Connecticut State League shortly before it folded and Grant went 5 for 13 in his final crack at white pitchers in league play. He also played for the Cuban Giants that year.

Statistics for the rest of Grant's career are spotty as he reached his prime age, as top-quality black teams were few and far between and rarely played one another. He remained at short or second for the Cuban Giants, Cuban X-Giants and "Genuine" Cuban Giants until 1903, when he joined the Philadelphia Giants and went just 6 for 27 against the X-Giants at the ripe old age of 38. It was basically the end of his career. Given his performance in the IL in the 1880s, it is safe to assume Grant could have been a star in the major leagues had they permitted African-American players at that point.

After retiring, Frank worked as a waiter until he died in 1937 of arteriosclerosis. 69 years later, he was voted into the Hall of Fame by the Special Committee on the Negro Leagues in the 2006 Hall of Fame Election.

Main sources: The Complete Book of Baseball's Negro Leagues by John Holway, The Biographical Encyclopedia of the Negro Baseball Leagues by James Riley and The International League: Year-by-Year Statistics by Marshall Wright