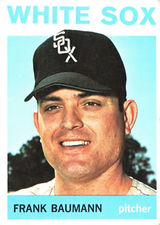 A much-heralded high school pitching prospect from St. Louis, left-hander Frank Baumann was the focus of a bidding war. Bill Veeck and the hometown St. Louis Browns offered him a $30,000 bonus, but the Boston Red Sox tripled that offer and signed him in 1952. Given the nickname "Beau", derived by the pronunciation of his last name, by Boston owner Tom Yawkey, he showed promise in 1953 with a 10-1 record with the Louisville Colonels, earning a spot on the All-Star team. He spent 1954 in the Army, and overall was in the minors for six years. He played in the American Association, Eastern League, Texas League, Southern Association, and Pacific Coast League, posting a 35-22 record and 4.15 ERA in 487 innings over 81 games.

Baumann had stints with the Red Sox from 1955 to 1959 but did not live up to his promise. Following the 1959 campaign, he was traded to the Chicago White Sox for Ron Jackson. He went on to have his finest big league season for Chicago in 1960, going 13-6 with a league-leading 2.67 ERA. But he soon came crashing back to earth, posting a 6.15 ERA in the first half of the 1961 season. After five seasons with the White Sox, he was traded to the Chicago Cubs for Jimmie Schaffer, the first time the crosstown rivals had ever completed a trade. He made four appearances out of the Cubbie bullpen, finishing his big league career in 1965.

Since his playing days ended, Baumann was in both automobile and appliance sales for a time before managing an ice rink owned by hockey star Barclay Plager. He was later a liquor salesman and was employed with the State of Missouri Lottery Commission. Most recently, he was in sales for the Crown Linen Company.