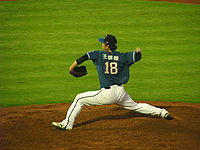 Feng-Hsin Wang has pitched in Taiwan. His twin brother played in the Taiwanese minors.

Wang debuted in 2001 with the Taiwan Major League's Kaoping Fala, going 1-1 with a 2.41 ERA in eight games. When he beat the Chianan Luka on July 31, he became the youngest pitcher in the history of Taiwanese pro baseball to win a game (18 years, 150 days old). He had a 1-0, 4.19 record for the 2002 Fala. The Taiwan Major League folded at year's end and Wang went to college. In 2004, other teams protested National Chiayi University's use of a player with professional experience, causing the school to lose eligibility.

Wang returned to the top tier of Taiwanese pro baseball in the 2008 CPBL with the La New Bears, with two earned runs in 1 2/3 IP. He tossed two scoreless innings in 2009. He became a reliable hurler in 2010 at 7-4, 2.60 and won Most Improved Player honors. Had he qualified, he would have been 5th in the CPBL in ERA, between Chien-Fu Yang and Chris Mason. He also tied for 11th in wins.

The Bears became the Lamigo Monkeys in 2011 and Wang fell to 4-5, 4.18 while missing considerable time after being hit by a Yi-Chuan Lin liner. In the 2011 Taiwan Series, he won game three against the Uni-President Lions, allowing one run in a complete game decision. It was the lone Monkeys win that Series, Wang preventing the sweep. In 2012, the righty went 4-4 with a save and a 5.08 ERA.