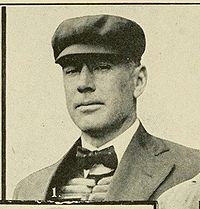 Ernie Quigley was a National League umpire for 26 years. He umpired his first games in 1913 and worked full-time until 1936 before filling in for some games in 1937 and 1938. In all, he worked 3,356 regular season games as well as six different World Series. After retiring, he was the supervisor of the NL umpires.

Before going into umpiring, he played in the minor leagues from 1905 to 1910. He was a player/manager for many of those years. He began umpiring in the Wisconsin-Illinois League in 1911, the New York State League in 1912 and the International League in 1913 before being added to the NL umpiring roster.

He was inducted in the Canadian Baseball Hall of Fame in 2021 as part of its large class of Canadian baseball pioneers.