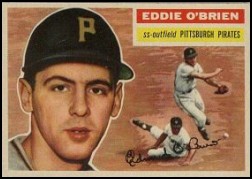 Eddie O'Brien was the Bucco double play partner and twin brother of Johnny O'Brien. They were both basketball stars at Seattle University, both spent most of their careers as teammates with the Pittsburgh Pirates, and they both missed the 1954 season due to miltary service.

In addition to his play as an infielder, Eddie also appeared in five major league games as a pitcher with an ERA of 3.31. His brother Johnny also pitched at the major league level sometimes.

After his playing career ended, O'Brien was the athletic director of Seattle University from 1958 to 1968 and a Seattle Pilots coach in 1969. He returned to Seattle University after the Pilots left town after one season, and retired from his position in 1980; he also coached the baseball team at least some of the time during this period. He remained very active in collegiate athletic matters until his death in 2014, aged 83; he had attended a college basketball game the night before he passed away.