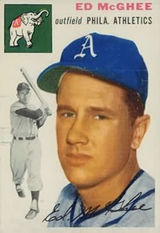 Ed McGhee got most of his major league at-bats as the regular center fielder for the Philadelphia Athletics in 1953.

He was at Arkansas State College in 1946 and 1947. He signed with the Chicago White Sox in 1948, and broke into the majors with them in 1950. He was traded to the Athletics in 1953 in the Ferris Fain deal. Eighteen months later, he was traded back to the White Sox, where he ended up his major league career in 1955.

On May 30, 1954, less than two weeks before he would be traded back to the White Sox, he won a game for the Athletics over the Washington Senators with a bases-loaded pinch-hit double in the 9th inning.

Only one other major leaguer has had the last name "McGhee" through the 2013 season. Bill McGhee was also a Southerner and also played for the Philadelphia Athletics, albeit in 1944 and 1945.

McGhee appeared in more major league games than any other player out of Arkansas State except George Kell and Matt Whiteside (through 2013).