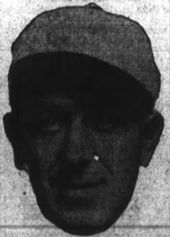 Ed Irwin (known as Bill Irwin during his baseball career) played one game for the 1912 Detroit Tigers, getting two triples in three plate appearances for a batting average of .667. At age 30, Ed was five years older than Ty Cobb.

Ed was born in Philadelphia, PA, two years after Christy Mathewson was born in Pennsylvania. Ed's exact day of birth is not known. He played six seasons in the minors, including parts of three seasons with the Kingston Colonials. His time with the 1912 Tigers came in his last year of pro ball.

Ed's SABR Biography indicates that he was known during his lifetime as Bill Irwin, and his one game for the 1912 Tigers was on the occasion of the famous game when some of the Tiger players had walked out in protest of Cobb's suspension after his fight with a fan, and Detroit had to come up quickly with some replacement players. Irwin, unlike some of the other replacement players that day, did have substantial minor league experience. The 1912 Phillies employed Irwin for a while as a warm-up catcher for their pitching staff, and let him play in an exhibition game against the Wilkes-Barre Barons. When the Tigers used Irwin for the replacement game, the press referred to him as having previously been with the Phillies. After the game, he played for the Columbia Comers that year. After his pro career, he played some semi-pro ball and worked for a railroad. He died young as a result of a bar fight. The press and his death certificate referred to him as Ed Irwin.