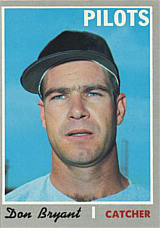 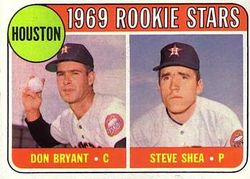 Catcher Don Bryant played parts of three seasons in the majors and later was a big league coach. At 6' 5", he was one of the tallest catchers in big league history.

Bryant grew up in Jacksonville, and played football, basketball, and baseball at Paxon High School. Upon graduation, he was signed by the Detroit Tigers. After several seasons in the Tigers organization, he was sold to the Chicago Cubs in 1965. He reached the majors with the Cubs in the middle of 1966 and hit .308 in 13 games backing up Randy Hundley. Prior to the 1967 season, he was traded to the San Francisco Giants for Dick Bertell, spending the next two years with the AAA Phoenix Giants. After the 1968 season, he was selected by the Houston Astros in the 1968 Rule V Draft. In 1969, he got into 31 games as the backup to Johnny Edwards. He hit .186 and clubbed his only major league home run, on May 3, against Bobby Bolin of the Giants. The blast put the Astros ahead; they went on to win, 4-3. Bear got into 15 more games with Houston in 1970. After the season, his contract was purchased by the Boston Red Sox, but he never played again in the bigs.

Following his big league days, Bryant played several years in the Red Sox system and was a player/coach for the Pawtucket Red Sox in 1973. He was a Boston coach from 1974 to 1976, serving on skipper Darrell Johnson's staff. When Johnson moved to the expansion Seattle Mariners in 1977, Bryant followed, remaining with the club until 1980.

Bryant got his barber's license as a young man and returned to that occupation following his baseball days, running a barber shop in Florida until the year prior to his death.