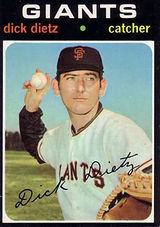 Dick Dietz was a catcher who played eight years in the major leagues. He was an All Star in 1970. Given that his entire career was played in a dead-ball era, his .261 lifetime batting average was decent. For example, in 1968 when he hit .272, his team hit .239.

Dick Dietz's most famous moment in baseball came in 1968. The Giants were playing against Don Drysdale, who was trying to break Walter Johnson's record for consecutive scoreless innings. With the bases loaded, Drysdale hit Dietz with a pitch. The umpire ruled that Dietz had not tried to get out of the way of the pitch, denying him first base and preventing the run from coming home. Drysdale retired Dietz and eventually broke Johnson's record.

Dietz hit a home run in the 1970 All-Star Game. A front office foul-up left Dietz exposed to waivers in 1972 and the Los Angeles Dodgers wasted no time in snapping him up. Injuries kept him out for most of the 1972 season, however, and effectively ended his career a year later.

Dietz was active in the Major League Baseball Players Association at a time when the major league owners were not at all fond of it, and Dietz felt that his involvement might have shortened his career.