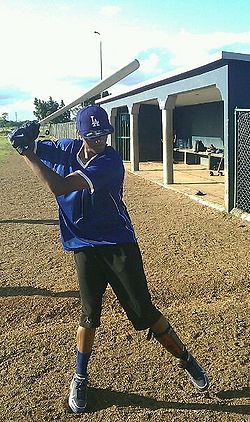 Dennis Santana, whose full name is Dennis Anfernee Santana Sánchez was born on April 12, 1996 in San Pedro de Macoris in the Dominican Republic. He showed interest in baseball from a very young age, prompted by his parents Delia Berenize Sanchez Gerlado and José Gregorio Santana Vásquez. He displayed his passion for the game during four years playing in the Miramar League, while still in school.

Santana was originally a right-handed hitting shortstop, on a frame of 6' 3", 175 lb. From the age of 13, he displayed the type of talent that left scouts with their mouths agape. In December of 2012, he was signed by Los Angeles Dodgers scout Patrick Guerrero, the contract being finalized on March 12, 2013.

In 2009, he hit .590 with 2 homers and 17 RBI in 10 games in the Miramar League's tournament for 13 and 14-year-olds, leading his team to the finals. He finished second in batting, first in runs scored, and was selected to the Dominican Republic's junior national team. He also played third base in addition to shortstop, as well as pitching. His fastball was timed at 94/95 mph and he hit the baseball as far as 400 feet, which explains why he was signed at such a young age. Scouts found his bat speed to be sensational, called his arm "golden", and his built statuesque - the perfect body for a baseball star.

In 2017, he started the season in the California League with the Rancho Cucamonga Quakes, going 5-6, 3.57 and then received a promotion to the AA Tulsa Drillers, where he was 3-1, 5.51. He logged a total of 118 1/3 innings and struck out 129 batters, and was again a mid-season All-Star, this time in the California League. He was back with Tulsa at the start of 2018, where he went 0-2, 2.56 in 8 starts, then moved up to the AAA Oklahoma City Dodgers in mid-May, where he was 1-1, 2.45 in his first two starts. That is when he was called up to the majors as Clayton Kershaw returned to the disabled list.

In his major league debut for the debut on June 1, 2018, he came in to pitch against the Colorado Rockies after reliever Scott Alexander had recorded the first four outs of the game. He allowed 5 runs in 3 2/3 innings, but also hit a two-run double in his first career at-bat. In spite of a shaky outing, he was credited with the win as Los Angeles prevailed, 11-8. He was scheduled to make his first start on June 7th against the Pittsburgh Pirates but hurt a lat muscle warming up and was scratched just before the game. Before that, he had been used a pinch-hitter on June 3rd, striking out against Chad Bettis in the 4th inning of a 10-7 win against the Rockies.