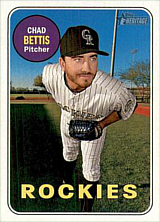 Pitcher Chad Bettis was selected by the Houston Astros in the eighth round of the 2007 amateur draft but did not sign, opting to attend Texas Tech instead. He was then chosen by the Colorado Rockies in the second round of the 2010 amateur draft. Signed by scout Dar Cox, he made his pro debut that summer with the Tri-City Dust Devils, going 4-1 with a 1.12 ERA in 10 outings. He earned a promotion to the Asheville Tourists, winning 2 of his 3 starts while posting a 0.96 ERA. With the Modesto Nuts in 2011, he went 12-5 with a 3.34 ERA in 27 starts. He led the California League with 184 strikeouts and was named the league's Pitcher of the Year.

Chad made 37 appearances in his first two big league seasons with skyrocketing ERAs. He pitched a great game to record his first win of his third season, the 2015 tilt - and only the second of his career - on May 24th. Facing the San Francisco Giants, he gave up a lead-off single to Nori Aoki in the 1st inning, then did not surrender another hit until Matt Duffy led off the 8th, also with a single. He tired in the 9th but ended up with an 11-2 win in the longest outing of his career, 8 1/3 innings. H e had another memorable game on May 29th when he took a no-hitter into the 8th inning against the Philadelphia Phillies before Cody Asche singled with one out. Asche hit a routine grounder where shortstop Troy Tulowitzki would normally have been, but it went through for a hit because of a defensive shift. Tulo had earlier cost Bettis a potential perfect game with an error in the 7th, but he also hit a pair of homers in the Rockies' 4-1 win. Bettis ended up giving up two hits in 8 innings, with no walks and 7 strikeouts, to win for the second time, and John Axford pitched the 9th, giving up an unearned run. He ended the year at 8-6, 4.23 in 20 starts.

He was one of the Rockies' best pitchers in 2016, when he went 14-8 with an ERA of 4.79. That was good for an ERA+ of 102 in the tough environment of Coors Field. He logged 186 innings and led the team in both wins and innings pitched. He was diagnosed with testicular cancer after the season and underwent surgery on November 29th. The disease was caught early, at a stage where it was still treatable. He was declared cancer-free in January but suffered a relapse in March and needed to undergo aggressive chemotherapy as a result. There was no timetable for his return, but he did manage to make it back that year, making his first start for the Rockies on August 14, 2017. He was outstanding, throwing 7 shutout innings as the Rockies shut out the Atlanta Braves, 3-0. The game was still scoreless when he left, so reliever Rex Brothers ending up getting credit for the win. He finally registered his first victory on September 9th, when he defeated the slumping Los Angeles Dodgers, 6-5, in his sixth start since his return. He finished the year at 2-4 with a 5.05 ERA. Following the season, he was named recipient of the Tony Conigliaro Award given to a player displaying courage, spirit and determination to overcome personal adversity. He struggled in the two ensuing seasons, battling issues with blisters, before being outrighted off the Rockies roster and declaring free agency following the 2019 season. He signed a minor league contract with the New York Yankees in February 2020 but announced his retirement in June of that year.