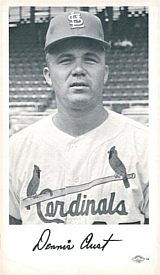 Dennis Aust pitched 15 games for the St. Louis Cardinals between 1965 and 1966. His manager both years was Red Schoendienst and one of his teammates on the pitching staff was Bob Gibson. Aust was born in Nebraska and went to high school in Florida. He attended the University of Florida in 1960-1961. Although quite a few major leaguers have come out of the University of Florida, Aust was the only one who attended the school between 1957 and 1970. Dennis pitched eight seasons in the minors, with parts of six seasons at Tulsa.