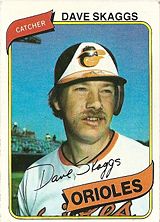 Catcher Dave Skaggs was a Baltimore Orioles farmhand from his initial drafting in the 6th round of the 1969 amateur draft until his big league debut in early 1977. He hit .287 in his rookie year of 1977, splitting time behind the plate with Rick Dempsey. Skaggs played three more years in the bigs including being part of the 1979 squad that made it to the World Series. He served as the personal catcher for Dennis Martinez that year, including in his two postseason starts. When he collected his 100th career hit that season, teammates joked that this was exactly 100 more than anyone believed he would ever hit in the majors.

In total over four seasons he hit .241 in 510 at-bats but with little power or walks. Skaggs belted three big league homers, two of those coming at the expense of Rick Wise. In fact he would have loved to face Wise more in his career - Skaggs went 5 for 7 with 2 doubles and 2 homers in their limited matchups.

In 1990, Skaggs played for the San Bernardino Pride of the Senior Professional Baseball Association. He played in 15 games and was batting .265 with 2 home runs and 11 RBI when the league folded.

Skaggs missed the 1970 season while on the military list.