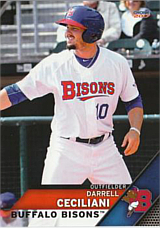 Darrell Ceciliani was a big league outfielder in three brief looks between 2015 and 2017.

Darrell saw his lengthiest big league look in his debut season, playing 39 games while hitting only .206/.270/.279 in 39 games for the Mets in 2015. He was designated for assignment the following January and flipped to the Toronto Blue Jays, for whom he hit .156 in fleeting action (16 games over 2016 and 2017). His final big league plate appearance was a doozy. Against the Atlanta Braves on May 18th, he socked a three-run home run off Julio Teheran, partially dislocating his shoulder with the swing. He was replaced in the game by Dwight Smith Jr. and never returned, playing a final 21 games in 2018 with the New Britain Bees of the Atlantic League.

His brother, Devin Ceciliani, was drafted by the Tampa Bay Rays in 2013 but did not sign and never played professionally.