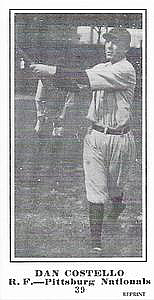 Dan Costello led the National League in pinch hits in 1915 with the Pittsburgh Pirates. He was a pinch-hitter almost as often as he played in the field, seeing his most action in 71 games in '15. Though listed as being in college from 1911-1914, he was already playing major league ball by 1913 with the New York Yankees. He was briefly in New York in early July, presumably after school ended, and then did the bulk of his work with the Pirates from 1914-1916.