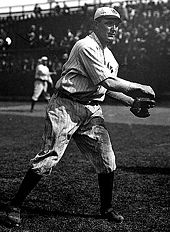 Cozy Dolan made his big league debut as a 27-year-old with the Cincinnati Reds in 1909. Primarily an outfielder, he saw his most consistent playing time with the St. Louis Cardinals in 1914 and 1915.

Dolan was a New York Giants coach from 1922 to 1924 and appeared in one game for the club in his first year on their staff. He was banned from baseball for an incident that happened late in the 1924 season. On September 27th, Jimmy O'Connell offered Philadelphia Phillies shortstop Heinie Sand $500 to throw a game. When questioned by Commissioner Landis, O'Connell said that he was told by Dolan to make the offer. Dolan's response to each question was "I don't remember." Both men were banned.