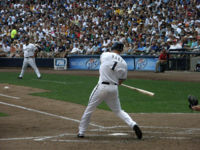 Corey Hart was drafted by the Milwaukee Brewers in the 11th round of the 2000 amateur draft. He was signed by scout Mike Gibbons and made his pro debut that summer.

Hart missed the entire 2013 season after undergoing surgery for a meniscus tear in his knee in January. On December 11th, he signed a one-year contract as a free agent with the Seattle Mariners. he managed to return to the major leagues with the Mariners in 2014, but played only 68 games, with disappointing results: a .203 batting average, 6 homers and 21 RBIs while serving primarily as a DH.

In 2015, he moved to the Pittsburgh Pirates as a free agent, which was a good opportunity given the team's two first basemen the previous year, Gaby Sanchez and Ike Davis were no longer with the team, and presumptive starter, Pedro Alvarez was only learning the position. He suffered a freak injury early in spring training, however, when he cut his foot on a piece of plastic while getting into a hot tub and had to miss some time as a result. It was a harbinger of a poor season in which he hit just .222 in 35 games. He played his final game on June 21st of that year.