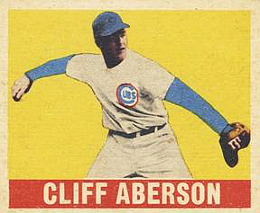 Cliff Aberson graduated from Senn High School in Chicago, where he played football and baseball, and tried out for the Moline Plowboys in the Class B Three-I League but was rejected. He then enrolled in the Phillip K. Wrigley baseball school and was signed to the Janesville Cubs in the Class D Wisconsin State League in 1941. He played there through the 1942 season, when he joined the Army. While stationed at Kessler Field, MS in 1943 and 1944, he played football for the team coached by Herman Rohrig, an ex-Green Bay Packer who recommended Aberson to Green Bay when he was discharged in the spring of 1946. He was sent to Europe in 1945 with Company L 314th Infantry 97th Division and participated in the Central Europe Campaign winning the Combat Infantryman’s Badge, Bronze Star Medal and one battle star. He was discharged on March 22, 1946 at Camp McCoy, WI, with the rank of Sergeant. He played football for the Packers in 1946, logging time as the team's starting quarterback without any college football experience.

In 1947, he played baseball for the Des Moines Bruins in the Class A Western League and the Tulsa Oilers in the Class AA Texas League. When it came time to report to the Packers for football season, the Chicago Cubs offered him a trial in the majors if he left football. He agreed and made his debut on July 18, 1947, spending the remainder of the season with the Cubs. In 1948 and 1949, he played for the Cubs and the Los Angeles Angels of the Class AAA Pacific Coast League. In 1950, Aberson played for the PCL's Hollywood Stars, the Mobile Bears of the Class AA Southern Association, and St. Paul Saints of the AAA American Association. At the end of the season, he retired from baseball to try out unsuccessfully with the Chicago Cardinals of the NFL.