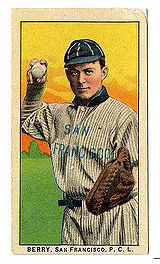 Claude "Admiral" Berry had three cups of coffee in the big leagues but finally became a regular catcher with the Pittsburgh Rebels of the Federal League in 1914 and 1915. He is most famous for introducing the athletic cup to baseball. [1]

Claude was born in Losantville, IN, 70 miles northeast of Indianapolis, IN. He played a couple of seasons for the Dallas Giants before joining the Indianapolis Indians. He was with the Cedar Rapids Rabbits for a couple of years, and the Williamsport Millionaires for one before settling down for five seasons with the San Francisco Seals and one with the Portland Beavers, and after his Federal League years, ended up with the Kansas City Blues for a couple of years. In all, he played 14 seasons in the minors.

Berry never hit close to .300 in the majors or minors, and had little power. Perhaps his most notable year with the bat was early in his career with Dallas when he hit .274 with 6 triples, a total that led the team.

He lived to be nearly 94 years old.