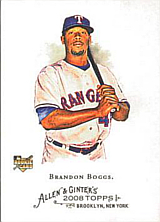 Outfielder Brandon Boggs was drafted in the 50th round of the 2001 amateur draft by the New York Yankees. He opted for college and was selected by the Texas Rangers in the fourth round of the 2004 amateur draft, making his pro debut July 2nd with the Spokane Indians. He hit his first home run July 10th and overall hit .235 in 45 games. He spent the next year with the Clinton Lumber Kings, for whom he hit .246 with 13 homers during the regular season and .385 in 4 playoff games. In 2006, he was with the Bakersfield Blaze and hit .261 with 8 home runs in 78 games for the team. He spent the first month of the 2007 season back with the Blaze and hit a 3-run home run on Opening Day. He hit .250 with 4 homers with Bakersfield before being promoted to the AA Frisco RoughRiders in early May. In 104 games, he hit .266 with 19 homers.

Boggs started 2008 with the Oklahoma RedHawks and hit .309 in 18 games before being called up by the Rangers in late April. He made his debut against the Kansas City Royals on April 29th, going 2-for-2. He entered the game as a pinch hitter and replaced Frank Catalanotto in left field. He played 101 games in the major leagues, putting up a batting line of .226/.333/.399, with 8 homers and 41 RBI. He made only brief appearances with the Rangers in 2009 and 2010, going a combined 1 for 24 in 13 games, and spending the bulk of his time in Oklahoma City. In late August 2010, the Rangers designated him for assignment to make room for veteran outfielder Jeff Francoeur, acquired from the New York Mets. After the season, Boggs signed a contract as a free agent with the Milwaukee Brewers on November 24, who added him to their major league roster. He saw his last action in the bigs with Milwaukee, playing professionally in various circuits through 2015.