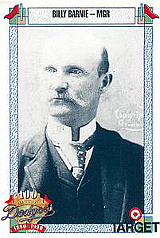 "There was a standing remark that, like the lamented Harry Wright, Barnie was too good for professional base ball and too honest for his own good. . . But there was compensation better than dollars and cents in the universal respect which Barnie, like Harry Wright, enjoyed in the base ball world." - from Sporting Life's obituary of Billy Barnie

Billy Barnie played four seasons in the majors and managed 14 years. His playing seasons were in 1874-1875, 1883, and 1886. During his playing days, his appearances were split about equally between catcher and outfield. As a catcher, he made 76 errors in 53 games, while as an outfielder he made 23 errors in 46 games. His batting average was .171. He began managing in 1883 and spent 9 years with the Baltimore Orioles in the American Association and in the National League. He then managed three different teams in the National League. None of his teams finished higher than 3rd. When he wasn't managing in the AA or the NL, Barnie managed the Scranton Coal Heavers in the Eastern League in 1895, the Hartford Bluebirds in the Atlantic League in 1896, and the Hartford Indians in the EL from 1899 until mid-1900. He also was an umpire in the National League and American Association between 1882 and 1892.

Sporting Life of July 21, 1900 carried his lengthy obituary, calling him "one of the best known base ball men in the country". It stated that he started in amateur ball at a very young age in 1865. He was primarily a catcher during his playing career, but when he became "crippled in one hand" he started to manage. In addition to a long career as a manager, he was also the organizer and part owner of the Hartford club. He was given credit for discovering a number of famous major leaguers, including King Kelly. He served on the rules and scheduling committees of the American Association and is responsible for at least one rule change that endures to this day, the creation of the Coaches box, down the two base lines. He made the suggestion to confine coaches to such a box after a number of team had taken to the habit of having their third base coach interfere in the play by running down with a baserunner in order to draw a throw, and do various other unsporting gestures; Arlie Latham of the St. Louis Browns was a particularly enthusiastic offender. The rule was adopted at his suggestion in the middle of the 1886 season.