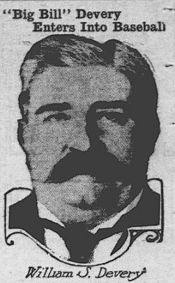 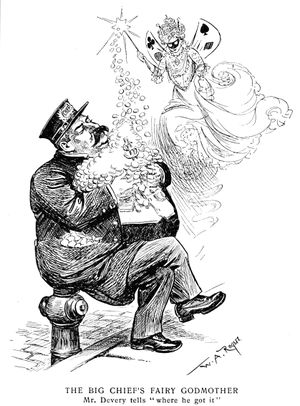 Cartoon depicting Devery as the "honest" policeman in 1902

Devery was schooled by Richard Croker, the efficient and ruthless overlord of Tammany Hall, in the collection of honest graft, the tariff imposed upon saloons, gambling dens, brothels, offtrack-betting parlors, dance halls, and other spots requiring police indifference From his SABR bio.

Frank Farrell and Bill Devery were the first owners of the New York Highlanders - later to become the Yankees. They purchased the Baltimore Orioles on January 3rd, 1903 for $18,000. They were allowed to purchase the team and move it to New York, NY because of their ties with the local politics. All previous attempts to move a team to Manahattan had been blocked by the Giants. Devery was an openly corrupt New York City police Chief who had been forced out of the department shortly before purchasing the team. After the 1914 season the duo sold the team to Colonel Jacob Ruppert and Captain Tillinghast L'Hommedieu Houston

Devery was the last superintendent of the New York City Police Department police commission and the first police chief in 1898. On February 5, 1897 as a captain, he was arrested and charged with bribery and extortion. After conviction, he was dismissed from the force. He appealed his conviction to the New York State Court of Appeals. It was overturned and he was reinstated to the force and promoted to inspector on January 7, 1898, and Deputy Chief on February 14, 1898. He was then appointed Chief of Police on June 30, 1898.

Devery became morbidly obese in his later years, weighing well over 300 lbs. He suffered from influenza during the winter of 1918-1919, and developed heart disease upon his recovery. He died from a stroke on the afternoon of June 20, 1919. Even though he was extremely corrupt, he died with almost nothing. Almost all of his properties were mortgaged and his estate was left a thousand dollars in the red after the debts were settled.