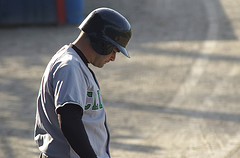 Catcher Ben Crabtree was selected by the Texas Rangers in the 26th round of the 2005 amateur draft and played two seasons in their organization.

Crabtree hit .417 in high school and twice made All-State for Connecticut. He then batted .562 at prep school in 2001. Going on to Ohio University, he batted .344 as a freshman and was named a Freshman All-American by Collegiate Baseball. Ben set an Ohio U. record with 91 hits in 2003, when he hit .387 to lead the club. He made All-Mid-American Conference. His junior season, he hit .307, missing time with an injured wrist. Moved to first base on a more frequent basis, he fell to second-team All-MAC. As a senior, Ben was back behind the plate and back as first-team All-MAC. He hit .344/.405/.555 with 49 RBI in 51 games. He finished as Ohio's all-time hit leader with 269; Ohio had produced Mike Schmidt and Bob Brenly among other major leaguers.