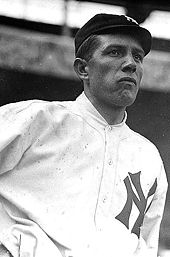 "Despite the fact that Venice finished fourth in the six-team league, Borton was hailed by Sporting Life as 'the best first sacker ever in the Coast League with the exception of the ‘native son’ Hal Chase.' That status did not go unnoticed by the Federal League when it stepped up its raids on Organized Baseball . . ." - from a biography of Babe Borton [1]

Babe Borton burst onto the scene in 1912, hitting .371 in 105 at-bats for the Chicago White Sox. Except for part of a season spent with the New York Yankees in 1913 (the Yankees traded Hal Chase to get Borton and another player), he was an above average hitter in the majors. He was a leader in a couple of offensive categories in the 1915 Federal League (establshing the circuit's single season record for walks with 92), and while he hit only .224 in the 1916 American League, he made up for it with lots of walks.

Much like the man he was once dealt for, "Prince Hal", Babe was kicked out of a league (in his case, the Pacific Coast League) after admitting he conspired with gamblers to throw games.