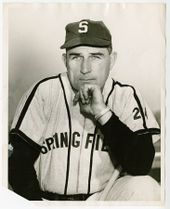 Archie Allen was a minor league outfielder for four years and a college coach for 31 seasons.

He also managed the U.S. squad at the 1963 Pan American Games (they won Silver) and managed the Dutch National Team to Gold in the 1964 European Championship.

In 2018, he was posthumously inducted into the Western Massachusetts Baseball Hall of Fame.