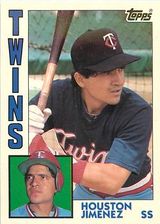 Houston Jiménez got his nickname from a character in a TV Western. His pro baseball career started at the age of 16, when the shortstop batted .212/.350/.333 for the Puebla Parrots. He spent the 1975 season with the Key West Cubs, hitting .215. Returning to the Mexican League in 1976, Jimenez batted .230 for Puebla. Jimenez batted .303/~.349/.378 in the Mexican League in 1977, earning him another shot in the US-based minors, but he struggled while playing for the Iowa Oaks in 1978. He had his best season in terms of speed stats that year, hitting 10 triples for Puebla and stealing 26 bases.

Despite unimpressive stats with the Toledo Mud Hens, Jimenez got several cracks at the Twins in the 1980s, but failed to post an OPS of 500 in his two seasons in the majors. It is unclear if Jiménez could find work anywhere in 1986 - Pat Doyle's minor league database lists him with no stats that year and the Mexican League encyclopedia does not list a return to Mexico. Baseball-reference.com notes a release by the Twins but no signing until the off-season.

In 1987, Houston continued to struggle in the US, hitting poorly for the Vancouver Canadians and the Pittsburgh Pirates. After a 1 for 21 season for the Cleveland Indians in 1988, he was released in early June and spent the next four seasons out of baseball during the summer (though he played winter ball throughout this period).

1995 was Jiménez's 4th .300 season in Mexico, with a career-high .337, .503 slugging and 40 doubles. He posted a .431 OBP and drove in 59 runs and drew 64 walks, career highs. After two decades as a generally poor offensive contributor, Jiménez even led the league in a category, posting the most doubles in the Mexican League.

Jiménez faded after that, but was an effective contributor his final four seasons, batting between .250 and .299 each year, with a good number of walks and fair power for a shortstop. In his mid-to-late 30s, he had posted the best seasons of his career.

Jiménez had one of the longest careers in the history of the Mexican Pacific League. In winter ball, the shortstop hit .259 with 73 homers. Due to his long time in the LMP, he ranks 3rd in runs (754) and hits (1,339) and second in doubles (230, trailing only Hector Espino) and steals (209, behind Matias Carrillo). He hit .330 in four Caribbean Series.

After retiring as a player, Jiménez became a manager. He was with the Mexico City Red Devils in 2005 and then joined the Tijuana Colts a year later. He then moved on to the Colorado Rockies organization, and after a stint with the Tri-City Dust Devils, he joined the Asheville Tourists coaching staff in 2007.

In 2007, Houston was voted into the Salón de la Fama. He coached for the Mexican team in the 2009 World Baseball Classic and 2014 Central American and Caribbean Games. In 2013, he was inducted into the Caribbean Baseball Hall of Fame.