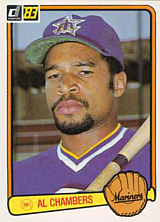 Al Chambers was the first overall selection in the 1979 amateur draft by the Seattle Mariners. He was considered a clone of the majors' biggest star at the time, outfielder Dave Parker of the Pittsburgh Pirates. Like Parker, he was big, 6'4" and around 215 pounds, and built like a professional football player. Unlike Parker, he could not hit a lick, batting .208/.326/.292 with 2 home runs in 57 games encompassing three big league seasons.

Chambers was born in Harrisburg, PA, and attended John Harris High School in the same town, the only major leaguer to make it from there. After his top selection, Al hung around in the Mariners organization from 1979 to 1985. He hit .300 in A ball in 1980, belted 20 home runs in AA ball in 1981, then batted .331 in the Pacific Coast League in 1983 and .308 in 1985. He simply could not put together any batting success in the majors. Al kicked around for nine years in the minors, later playing in th Mexican League. He crossed the picket line in 1995 for one last shot, but did not make it back.