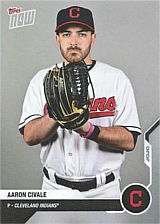 Pitcher Aaron Civale was a 3rd round pick by the Cleveland Indians in the 2016 amateur draft out of Northeastern University. He had a great major league debut for the Indians against the Detroit Tigers on June 22, 2019. He struck out the side in the 1st inning, and went on to pitch 6 scoreless innings, allowing just 2 infield hits, to receive credit for a 2-0 win. Civale made 10 starts, encompassing 57 2/3 innings, with a great 2.34 ERA. Evidently, these solid numbers were not solid enough to keep a roster spot during the COVID-19 pandemic, the Indians sending him to Triple A the day before a universal roster freeze.