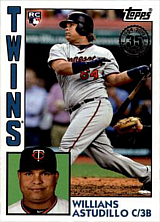 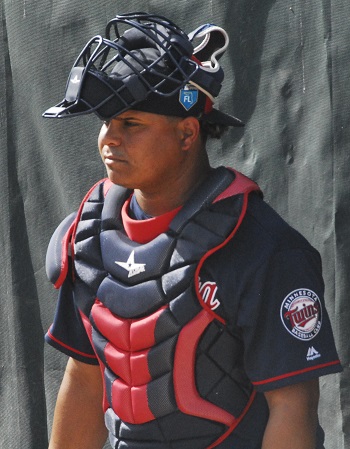 "All my minor league career I heard I was not going to be a big leaguer because I did not 'look' like one. I was too short. I was too stocky. I did not have the physical traits customary associated with a Major League player... Well, here I am." - Astudillo on Instagram

Willians Astudillo quickly became a fan favorite with the Minnesota Twins after being called up at the end of June in 2018. It was a result of his rather unusual physique, packing 225 pounds on a short 5' 9" frame, and his ability to play multiple positions, including center field, in spite of that apparently unathletic build. The fact that he was a prototypical bad ball hitter, swinging at almost any pitch and drawing few walks while not striking out much, also made him distinct. On July 14th, he made a pitching appearance, tossing the final inning of a a 19-6 loss to the Tampa Bay Rays. He helped set an unusual first, as the Twins became the first team since at least 1920 to allow 5 or more runs in each of the final three innings of a game. He did his part, allowing homers to Carlos Gomez and Jake Bauers in an inning of mop-up relief. On September 9th, he hit his first career walk-off homer, connecting off Jason Hammel of the Kansas City Royals with Max Kepler on base, to give the Twins a 3-1 win. He hit .355 in 29 games, with 3 homers and 21 RBI; his OPS+ was 139.

He opened the 2019 season with the Twins and earned some regular playing time early on as he filled in at first base for the injured C.J. Cron. He hit the IL in April with a hamstring strain and again in June with an oblique strain; in 58 games, he hit .268/.299/.379. In an interesting twist, he had the lowest strikeout rate of all major league hitters with at least 200 plate appearances, striking out just 8 times, or 3.9 percent of plate appearances. Next lowest was his teammate, Luis Arraez, whose strikeout rate was twice as high! In 2020, he appeared in just 8 games in the pandemic-shortened season, going 4 for 16 (.250) with a double and a homer, but got to make his postseason debut. He grounded into a double play in his only at-bat, which came as a pinch-hitter in Game 1 of the Wild Card Series against the Houston Astros.

He returned as a back-up utility player in 2021 and on May 17th set a record of sorts in an appearance as a mystery pitcher. He saw one of his offerings, an eephus pitch timed at a measly 47.1 mph, hit into the stands for a homer by rookie sensation Yermin Mercedes of the Chicago White Sox. It was the slowest pitch to have been hit for a homer since the introduction of Statcast! He had already entered the game to play catcher when he was called to the mound in the 9th inning, giving up just the homer in a 16-4 loss. He played a career-high 72 games for the Twins that year, batting .236 with 7 homers and 21 RBIs. His OPS+ of 74 was very similar to the one in his second busiest season, 2019, when it had been 79. He was principally a first baseman, although he also made starts at catcher, second base and in right field, and appeared four times as a pitcher. On November 24th, he was designated for assignment and then released as the Twins cleared roster space in anticipation of the upcoming Rule V Draft.