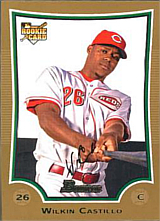 Wilkin Castillo was signed by Arizona Diamondbacks scout Junior Noboa in 2003 and spent the season with the DSL Diamondbacks before coming stateside in 2004.

Castillo was mainly a catcher in the minors, but also spent time at third base, the outfield and elsewhere. A product of the Diamondbacks organization, he spent five seasons in their farm system. He emerged as a prospect in 2007, when he hit .302 with 31 doubles in 109 games for the Mobile Bay Bears of the AA Southern League. His on-base percentage was a tepid .333 as he only drew 17 walks all year. He moved to AAA in 2008, playing for the Tucson Sidewinders of the Pacific Coast League, putting up a line of .254/.305/.358. On August 14th, he was included in a trade that sent Adam Dunn from the Cincinnati Reds to the Diamondbacks; Castillo went to Cincinnati alongside two other prospects and was called up when rosters expanded at the beginning of September. His made his debut as a pinch hitter on September 2nd and got his first major league hit the next day, also as a pinch hitter. He hit .281 in 18 games that first season, and then went 2-for-3 in 4 games for the Reds in 2009. He tore his labrum, ending his season and his big league career. Or so we thought...

Ten years after his last major league appearance, Castillo returned on June 22, 2019 as the catcher for the Miami Marlins against the Philadelphia Phillies. He hit a two-out, two-run double off the right-field wall at Citizens Bank Park to lead Miami to a 5-3 win. Since his last game, Wilkin's minor league and international itinerary sent him from the Atlanta Braves chain to the Colorado Rockies chain to the Los Angeles Dodgers chain to the Vaqueros Laguna of the Mexican League to the Toros de Tijuana to the Broncos de Reynosa to the Pittsburgh Pirates chain to the Toronto Blue Jays chain to the New York Yankees chain to the Long Island Ducks of the Atlantic League back to the Yankees and finally to Miami. After his triumphant return, Wilkin played one more game for the Fish before becoming a free agent at the end of the season.