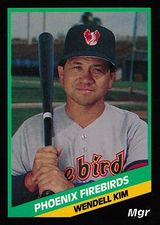 Wendell Kim has been a coach for several major league clubs and managed several teams in the minors.

After managing in the San Francisco Giants organization from 1981 to 1988, he was a Giants coach from 1989 to 1996. He was then a member of the Boston Red Sox staff from 1997 to 2000. After spending a year as skipper of the Indianapolis Indians, he returned to the majors as a Montreal Expos coach in 2002 and was a member of the Chicago Cubs staff the following two seasons.

Kim and his wife retired to Arizona in 2005. Suffering from short term memory loss, tests eventually determined that Kim had early onset Alzheimer's disease. He had to go to a facility specialized in patients suffering from memory loss and after a while was no longer able to communicate with friends or relatives. He passed away in 2015 at the age of 64.