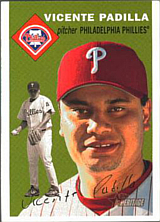 Vicente Padilla is a pitcher who played 14 seasons in the major leagues. He is best known for his work in the 2002 All-Star Game played in Milwaukee, WI. Representing the Philadelphia Phillies, he was the last pitcher available for the National League squad. He pitched two scoreless frames in extra innings, but when he could not continue, Commissioner Bud Selig declared the game a tie, as there were no pitchers left to take the mound.

He helped the Nicaraguan national team to the Silver Medal in the 1997 Central American Games. He was excellent as Nicaragua's closer in the 1998 Baseball World Cup, leading the tournament with two saves. He tossed eight shutout innings, fanning ten and allowing seven hits and no walks. Nicaragua won the Bronze Medal; in the Bronze Medal game, he relieved Marvin Zelaya with one out in the 8th of a 5-1 win over Italy. He retired all five batters he faced (Alberto D'Auria, Francesco Casolari, Luigi Carrozza, Ruggero Bagialemani and Federico Bassi), three by strikeout, to lock up the medal. He also played for Nicaragua when they won the Silver Medal in the 1998 Central American and Caribbean Games.

Originally signed by the Arizona Diamondbacks out of Nicaragua, Padilla was one of the key prospects obtained by the Phillies when they traded their ace Curt Schilling to the Diamondbacks in 2000. He pitched very well for the Phillies in both 2001 and 2002, winning 14 games both years, and appeared to be one of the best young pitchers in baseball. During this time, the Phillies' fanbase developed an outfield fan section dubbed the "Padilla Flotilla"; the fans would wear the traditional garb of Padilla's native Nicaragua, but would also bring oars to the game to wave around or pretend to paddle with. However, he was shut down after 20 starts in 2003, going 7-7 with a 4.53 ERA. He was mediocre in 2004, as attested by his 9-12 record and 4.71 ERA. Still, when he became a free agent after the season, the Texas Rangers offered him a large salary, as a result of the small number of pitchers available on the market that offseason.

Padilla was actually a good pitcher for the Rangers in 2006, although the favorable hitting environment in Ameriquest Field obscured that to some extent. He won a career-high 15 games, against only 10 losses, and posted a 4.50 ERA, good for a 102 ERA+. Still the Rangers' fans were looking for an ace, and his contribution was considered disappointing in light of his sizable salary. His reputation went down another notch in 2007 when injuries limited him to a 6-10 record with a career-high 5.76 ERA in 23 starts. He made a surprising comeback in 2008, taking advantage of the Rangers' outstanding hitting to post an 8-3 record with an ERA under 4.00 in his first 14 starts. He finished the year at 14-8, 4.74, in 29 starts, pitching 171 innings. He had another good season in 2009, going 8-6 in 18 starts for Texas, and then finishing the year with the Los Angeles Dodgers, for whom he went 4-0, 3.20 in 8 games. He won a game in the NLDS that year, beating the St. Louis Cardinals with 7 shutout innings in Game 3. He had another good start in Game 2 of the NLCS against the Phillies, giving up a single run in 7 1/3 innings. However, in Game 5, he was rocked for 6 runs in 3 innings and charged with the loss as the Dodgers were eliminated.

The Dodgers liked what they had seen and re-signed Padilla for 2010, but injuries limited him to 16 starts. He pitched 95 innings, going 6-5, 4.07. He was still struggling with his health in 2011 and was limited to 9 outings, all of them out of the bullpen. He saved 3 games with a 4.15 ERA, making his last appearance on May 13th. He became a free agent after the season and was signed by the Boston Red Sox for 2012, making the team as a long reliever out of spring training. He went 4-1, 4.50 in 56 relief appearances for the Red Sox, pitching 50 innings. He picked up a save and struck out 51 opponents while walking only 15.

On January 16, 2013, Padilla signed a one-year contract worth $3.25 million with the Fukuoka SoftBank Hawks of Japan's Central League. He was 3-6 with a 3.84 ERA and the team did not retain him for the next year.

Padilla threw an extreme change-up, a very slow curveball that reached the plate around 60 mph. While he only used the pitch occasionally, it was quite effective, as his fastball, thrown with the same arm speed, could reach 92 or 93 mph.