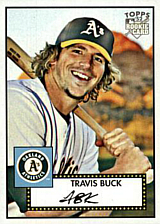 Buck was selected by the Oakland Athletics in the 2005 amateur draft. He was signed by scout Jeremy Schied for $950,000 and made his pro debut with the Vancouver Canadians, hitting .361 in 9 games before being promoted to the Kane County Cougars, where he hit .341 in 32 games. He began the next season with the Stockton Ports and hit .349 in 34 games. He was then promoted to the Midland RockHounds, where he hit .302 in 50 games in Double A. For the season, Buck hit 39 doubles in only 338 at bats.

Less than two years after being drafted, Travis made his MLB debut on April 2, 2007 as the A's starting center fielder. He had a strong first season, batting .288/.377/.474 with 39 extra base hits in 82 games. That would prove his big league peak. He made the A's Opening Day roster again in 2008, but only played 86 more games with them over the next three seasons. Non-tendered after the 2010 season, he saw limited action with the Cleveland Indians and Houston Astros the next two seasons before calling it a day after two seasons in the minors with the San Diego Padres.

In 2018, he was named baseball director of player development and bench coach at Boise State.