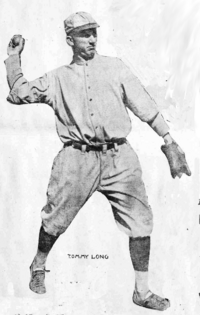 Tom Long had a short career but it included a remarkable accomplishment in 1915 when, playing for the St. Louis Cardinals, he led the league with 25 triples, eight ahead of 2nd place tripler Honus Wagner. Only one player since then (Kiki Cuyler) has hit as many triples in a season, and even before that only three players had been able to do better than 25 in the period from 1900-1915.

Long, who was born in 1890, came up briefly with the Washington Senators in 1911 and 1912. In 1915, when the established major leagues were competing for talent with the Federal League, Long became a regular for the Cardinals, and it was as a rookie that he hit his 25 triples. No one else on the Cardinals had more than 10 triples, and Long's .294 batting average was second on the team in a year when the league as a whole hit only .248.

An outfielder, Long's range factors were not at all impressive, in spite of the speed he showed while hitting triples.