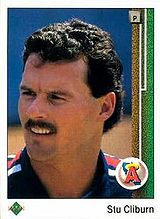 “What’s happened this year is unbelievable, but I never lost hope. As long as people kept giving me an opportunity, I knew there was a chance. I wasn't going to give up until someone said, 'Stew, you just can't pitch in the majors, go on home.' I mean, as long as I had a job, I looked upon it as my responsibility to stay motivated until someone gave me that chance. The Angels did that this year, and it's a dream come true. The struggle paid off, but remembering it keeps all this in perspective." - Stew Cliburn, Los Angeles Times, August 1985

Pitcher Stew Cliburn is the twin brother of catcher Stan Cliburn. Both played for the California Angels at different times in the franchise's history. Four years after Stan's lone big league jaunt, Stew made a skinny appearance, then shone in 1985 with a 9-3 record, 2.09 ERA and 6 saves in 44 relief appearances and 99 innings. A bout of tendinitis killed his chances for an encore, moving back to Triple A for two seasons before a solid 4-2, 4.07 record in 40 games capped his big league career in 1988. In 1990, Stew pitched in the Senior Professional Baseball Association with the Daytona Beach Explorers as a teammate of Stan; Stew pitched 10 games and was 2-1 with a 1.50 ERA and 2 saves when the league folded.

Stew soon became a minor league pitching coach, seeing an overwhelming majority of his work in the Minnesota Twins organization. He and Stan worked together again and again, on the coaching staffs of both the New Britain Rock Cats and Rochester Red Wings, with Stan managing and Stew handling the hurlers.