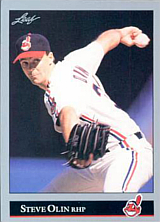 Steve Olin was signed as a 16th round pick in the 1987 amateur draft by the Cleveland Indians and scout Dave Roberts.

Coming off his best season, up-and-coming closer Olin was killed, along with fellow Cleveland Indians pitcher Tim Crews, in a boating accident in Florida during spring training in 1993. Pitcher Bob Ojeda was also seriously injured in the accident.