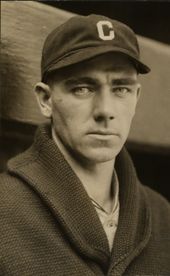 "One day in 1924, a young pitcher with the Cubs, John Fred Blake was sitting around a Chicago hotel room talking with his cronies... the talk turned to Prohibition, bootleggers and revenue officers... one of the men began to refer to Blake as 'Sheriff', though for no observable reason." - Lee Allen

Sheriff Blake pitched ten years in the major leagues, mostly with the Chicago Cubs in the 1920s. He was in college in 1920, and made his debut in June 1920 with the Pittsburgh Pirates. After that, he did not come back until 1924 working in a myriad of roles with the Cubbies. In 1928, he put together his finest season, pitching 34 games with an ERA of 2.47, a record of 17-11, and an NL best 4 shutouts among his career best 16 complete games. At the end of his personal best, he was struck down with an injury to his pitching hand, affecting the grip of his bread and butter curveball. He was able to go 14-13 on the Cubs' pennant-winning 1929 team, his last season with better than 200 innings. But after the 1931 season, split as a swingman with the Cubs and Philadelphia Phillies, he was out of the majors until 1937, when he came back for 29 games with both St. Louis franchises at the age of 37.

Blake is one of only four major league players to come from West Virginia Wesleyan College (through 2019), along with Greasy Neale, his contemporary in the major leagues.