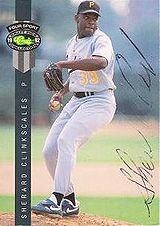 In 2007, Clinkscales became an assistant coach at the University of Notre Dame. Clinkscales resigned his position with Notre Dame on June 24, 2009 after three seasons with the program. Under his tutelage were future professionals David Phelps and Wade Korpi. He worked for the NCAA for two years, then joined the North Carolina State University staff as Associate Athletic Director in July 2011, then moved up to Senior Associate Athletic Director in January of 2012.