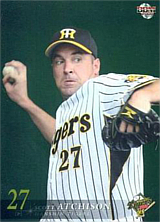 Scott Atchison pitched parts of three big league seasons before signing with the Hanshin Tigers for 2008. In 2010, he was back in Major League Baseball, pitching for the Boston Red Sox in each of the next three seasons, finishing his career in 2015 with the Cleveland Indians.

He retired in January 2016 and joined the Cleveland Indians coaching staff. He was listed as a "Major League Advance Coach and Staff Assistant" until being named bullpen coach in 2018. He left after the 2019 season.