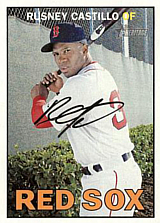 Rusney Castillo was one of the more lucrative busts in Cuban defector history. He agreed to a seven-year, $72.5-million deal with Boston and played only 99 big league games.

In early 2014, he defected from Cuba and established residency in Haiti; he was cleared by the US government to sign a contract in July, starting a bidding war among major league teams. 28 teams sent scouts to see him, and at least seven were willing to offer big money. On August 22nd, it was reported that the Boston Red Sox won the sweepstakes with a bid of $72.5 million over seven years, although the deal would not be made official for a few more days. It was the largest amount paid to sign an amateur player, topping the $68 million paid by the Chicago White Sox for Jose Abreu a year earlier. Castillo was expected to make his big league debut before the end of the season, despite not playing competitively for a year and a half. He did play his first game in The Show on September 17, 2014, without having played a minor league game. He started in center field, batting 7th, and went 1-for-4 in a 9-1 loss to the Pittsbugh Pirates. His first big league hit was a 4th-inning single off Francisco Liriano. He finished the year with a promising start: a batting line of .333/.400/.528 with a double and 2 homers in 10 games.

Castillo hit a bump in spring training 2015 as he missed two weeks of exhibition games with an oblique injury. He hit well when he returned, but by that time, the center field job had been claimed by Mookie Betts, who put up otherworldly numbers in the spring. With that position taken, veterans Hanley Ramirez and Shane Victorino playing the outfield corners and his other position, second base, manned by Dustin Pedroia, there was no place for him in the starting lineup. With the team brass wanting him to see a lot of playing time to make up for his curtailed 2014 season, he was sent to the AAA Pawtucket Red Sox to start the year. He hit .293 in 18 games before getting called up to Boston on May 22nd. He played 80 games in the bigs but the results were uninspiring: .253/.288/.359 in with only 17 extra base hits in 275 at bats. He only saw action in 9 games in 2016 before being designated for assignment and outrighted to Pawtucket, playing there for the next three-plus seasons to continue earning the rest of his guaranteed money. He was a star in AAA, making the All-Star team in both the 2017 IL and 2018 IL. However, by then his signing had become an embarrassment for Boston, so he remained buried in the minors while other younger players got the call to Boston when it came time to fill in briefly for an injured player.