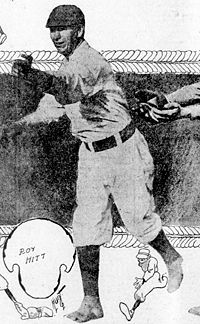 Roy Hitt spent one year in the majors but won over 200 games as a pitcher in the minors, mostly in the Pacific Coast League.

Roy was born in Carleton, NE in 1884. He is, through 2010, the only major leaguer born in Carleton, and is the only major leaguer other than Mysterious Walker born in Nebraska that year. His family moved to California when he was a child, however, and that is where he went to high school. He pitched at least one year for Ontario (CA) High School - Ontario is a town that in 2020 has almost 200,000 residents, but in Roy's time it had around 1,000.

Hitt pitched for Oakland at age 19 and went on to pitch for a number of PCL teams, winning at least 25 games in a season for San Francisco, Vernon and Venice.

By the time he came to the majors he was an experienced pitcher, although still only 23. He got 18 starts on a team which finished well under .500, and his 3.40 ERA was not as good as the team ERA of 2.41. He was six years younger than teammate Miller Huggins, who would go on to greater fame as a manager.

In 2004 Roy was elected to the Pacific Coast League Hall of Fame.

The book Baseball: The Golden Age states that Roy delayed reporting in 1907 because his wife was expecting a child.

The book The Califoria Winter League lists his winter league record. He pitched several years in the winter for teams such as Calexico and San Diego.