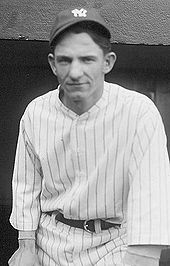 Pee-Wee Wanninger was the regular shortstop for the New York Yankees in 1925. He was the same age as teammate Lou Gehrig.

He replaced Everett Scott at shortstop on May 6th to end Scott's then-record consecutive games streak at 1,307. Less than a month later, on June 1st, he would make way for another record-long consecutive streak to start, when a rookie named Lou Gehrig pinch-hit for him. He hit only .236 for the season, with 1 homer and 22 RBI in 117 games, very poor statistics for the beginnings of the live ball era (this line was worth a terrible 43 OPS+).

After the season the Yankees traded Wanninger to the minor league St. Paul Saints. Wanninger went on to play many years for St. Paul (1926-1932), and then other teams through 1940. He also returned to the major leagues briefly in 1927, getting into 18 games for the Boston Red Sox and 28 for the Cincinnati Reds.

Wanninger also managed in the minors briefly. He had signed on to manage the Knoxville Smokies in 1934, but a disagreement with management caused him to quit two days before the season started. He later managed the Augusta Tigers for a month in 1936, the Anniston Rams in 1939 to a 5th place finish in the Southeastern League, then also manged in 1940 with the Huntington Aces and in 1941 with the Montgomery Rebels.