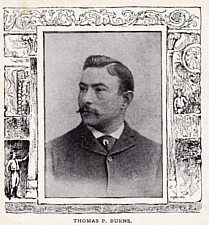 "He was a disturber and one of the worst that ever played ball. His disposition was very bad, and he made it unpleasant for any of the boys that crested him. He is what you would call a bulldozer. [Bridegrooms manager Bill] McGunnigle may be able to handle Burns, but I doubt it." - Ronald G. Shafer, citing an unnamed teammate of Burns in his 2011 book When the Dodgers Were Bridegrooms: Gunner McGunnigle and Brooklyn's Back-to-Back Pennants of 1889 and 1890

Oyster Burns played eleven seasons in the major leagues, appearing first in the Union Association in 1884, then in the American Association from 1884 to 1889, and finally with the National League from 1890 to 1895. His lifetime batting average was .300 and his Adjusted OPS+ was 135, which puts him at 114th all-time, tied with several others. Burns played every position but catcher, pitching in 25 games (he was 7-4 in 1885), playing 200 at shortstop (he was the starting shortstop for the 1887 Baltimore Orioles), 66 at third base, 21 at second base, 2 at first base, and 894 in the outfield (mostly from 1888 on and mostly in right field). The most similar batter to Burns, according to similarity scores, is Denny Lyons, his contemporary, who had a similar Adjusted OPS+, and who also played his early career in the AA before moving to the NL.

As a rookie in 1884 with the Orioles, he got attention by hitting 6 homers and 6 triples in 35 games at age 19. In 1887, he was one of six players who tied for the league lead in triples with 19. He showed that he could play in the National League in 1890, when, in his first year in the league, he hit 13 home runs with 128 RBI, leading the league in both figures. It was the first year that the Brooklyn Bridegrooms played in the NL (they had played in the American Association the previous year), and the Bridegrooms won the 1890 pennant, just as they had won the AA pennant the previous year. Burns had another good year in 1892 when he hit .316, good for fourth in the league, and slugged .454, good for fifth in the league. He did well enough in 1894, but when he slipped a bit in 1895, his major league career was over at age 30.

According to historian Lee Allen, Burns earned the nickname "Oyster" simply because he liked eating them. He was generally known as Tommy at the time.