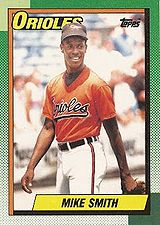 Mike Smith is one of three major league pitchers born Michael Anthony Smith to have played in the major leagues since the mid-1980s. He and Mike Smith were teammates in the Cincinnati Reds organization in the 1980s, and both went to spring training with the Baltimore Orioles in 1989. To distiguish between the two, he was dubbed "Mike Smith from Texas", while his teammate was "Mike Smith from Mississippi".